Here in the UK we are having a bit of a hot week, although this is tempered with people on different forums talking about imminent snow and worst winters ever.


Things are looking decidedly autumnal as the garden goes over its best and like a middle aged man things begin to bald, and then bulge and sag in unexpected places.
The exciting thing of the week has been a hardy lotus that has just flowered in the greenhouse. Being a fan of the Far East I love lotuses, and their leaves sum up all that is exotic. I had been after one for a while, but every time I got close to buying one I relented as they were either too expensive or the sellers didn’t want to sell them to me. I wonder if this is something unique to the plant world as you can’t imagine this happening in a clothes or jewellery shop ‘Oh no sir, your bottom looks far too big in that, put them back’. In a way it’s nice as it shows how people care about their plants...I certainly wince when I see loads of carnivorous plants being sold as I know that within a few weeks they will all be dead as people don’t know what to do with them 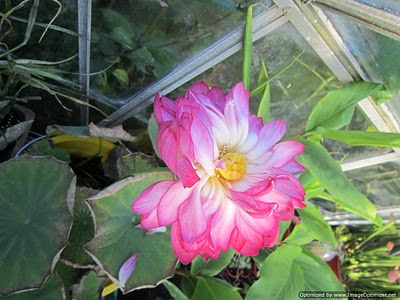 The lotus is an experiment as people say the main problem with them in the UK is that it isn’t hot or humid enough, and the growing season isn’t long enough for them to put down enough energy into the tubers. Certainly ones I’ve seen outside all look a bit brown and crinkled. So my plan is to grow it in the greenhouse where it is hot and humid, especially from the carnivorous plants. I also want to build a special pond/area for it (at the moment this special area is disguised as a orange B&Q bucket)
So far it seems ok, and it will survive dam it! especially after I built significant muscle carrying it back from Hampton Court flower show (it looked small but there was so much grit in that heavy waterlogged soil)

So I’m still trying to enjoy the garden, and starting to do the new bits...this was sped up by my parents appearing at the top garden carrying spades and forks, intent on clearing weeded areas and starting to clear virgin soil. I must admit it is good to see properly cleared areas and look forward to these getting bigger.  The garden is also about to get a visit from the BBC, whether or not this works out and if we have what they are looking for I don’t know, but it’s something to tick off the list, more on that later....