The things you find (and giant NGS tea pots)

Work continues apace on the new land with discoveries aplenty. Usually the only gift the land gives us is bricks and rubble, but we have found something new...


However, before that check out my new tea cosy in NGS colours that Mum has been knitted! it is actually a giant catering size teapot that is perfect for the open garden. The teapot its self is a bit of a family heirloom from aunt Betty, and now we can add to it. Mum the pom pom is simply inspiring!
Anyway...it all began last weekend when I was clearing a bed for some fruit trees I still need to order. I’m finding picking the right tree really difficult as some things you know...like a Greengage and yellow plum, but an apple tree? Who knows which one?!! I want to buy something a bit heritage but there is such a diversity of choices that I know I will buy something that tastes rank and be stuck with for a long time. 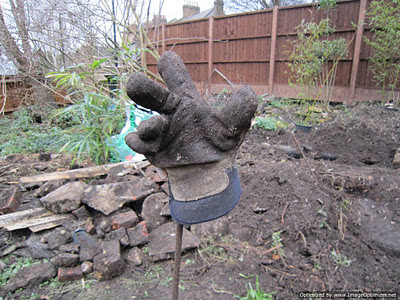 Anyway, the bed was all about dug and then just before lunchtime I hit a big bit of concrete about a foot under the surface which I couldn’t budge, so asked Steven to come and help after lunch. An hour later we realised we had found something big as the lump grew and ended up being a solid wall base around 9ft long by 6ft. The sun went down, and over the week it provoked much debate as to whether it was an Anderson shelter (a World War 2 war shelter that was common in the UK), a greenhouse base, pond, grave or Roman plunge pool.

So last weekend we went into the garden and began our Time Team excavation....it was all very exciting to see what was there and slowly but surely a large concrete pond, 3ft deep and complete with pedestals for lilies has emerged.
Also to emerge was a huge amount of crap, including some of the more exciting and random finds which includes:
·         About 20-30 small glass bottles of different size
·         A very rusty push lawnmower
·         A large iron wheel (old fashioned wheelbarrow wheel?)
·         A jar of cloves
·         A budgies food pot
·         3 tea pot lids
·         More broken glass
·         2 old fashioned solid irons of different sizes
·         A Victorian? Marmalade jar
·         A White Horse Peckham beer glass
·         Shoe polish tin
·         A fireplace surround
·         Lots and lots of rubble
All very exciting, and something we will keep (all be it with a pond liner). Oddly we were considering a formal rectangular fish pond in that area so we are obviously mystically connected to the land. I also like that we are keeping something of the old garden which adds to the integrity, and all of a sudden the design for the bottom of the garden makes sense, hurrah!
Rubble I have also been ingeniously assembling into a mound which I’m hoping looks something like a Neolithic burial mound. The idea being that it is a bit of a folly that I can stand at the top of and survey the land from and look down on the neighbours. It’s been kind of growing and growing as we find more rubble, and has got to the point where I need a step to climb up it. I don’t think Steven and the family quite know what to make of it as they look at it, pause and then ask what it is for and how I will cover it. However it WILL be fabulous, a triumph of folly design, vertical and arid gardening....that and its saving me £500 from getting more skips.
So still lots to do, don’t get me started on plant orders or the amount of money I have spent on seeds. There is also a tree surgeon to sort out, a garden day to arrange, a summerhouse to make the base of and order and a corner of the garden I don’t have a clue about!
Still more digging next weekend and soon it will be over, but what odd/crazy things have you dug up from your garden?
Posted by Clive at 11:03