Keeping bees: what it’s really all about and my journey so far

This is a good bee month...last weekend we managed to get 60 jars of honey! This has all reminded me that I haven’t posted much about the bees so thought I would do a bit of an overview of my journey and what beekeeping is really like....

Misunderstanding #1 ‘How many bees in a hive’
It is funny when you ask people this as generally they say a few hundred to 2 thousand. Very rarely do people guess right in that it is 30-50,000

Bees are still very much in the public consciousness with all the debates about pesticides and pollinator friendly plants. There are also a lot of people interested in beekeeping or wanting hives in their garden which was how I was feeling last year when Charlie (my beekeeping partner in crime) and I got some hives.

Misunderstanding #2 bees are out to sting you
I had thought that bees would be like cartoon bees and as soon as you open the hive fly towards you with their stings pointing at you ready to sting. In reality I was sting 10 times last year and 3 this one...generally they don’t want to sting you as when they do they die..

The first year was a baptism of fire....the two colonies of bees swarmed within a month....this is where the old queen flies off to a new home with a big chunk of the bees left in the hive leaving behind eggs with baby queens... This first happened when we were gardening and was like something from a horror movie with 1000’s of bees in the air circling round making a loud noise like a Hoover before settling in a watermelon sized clump
Last year we got no honey, and had to introduce a new queen as the baby queens failed to mate properly (they fly off to have masses of sex which then can give them sperm for 5 or so years!) they were a pain, literally.

Misunderstanding #3 that bees look after themselves
During the winter and spring they can eat shed loads of sugar syrup....and my arms are Orang-utan like from carrying bags of the stuff back to boil up to make syrup. You also need to inspect the hive (i.e. look at all the frames) from March/April till potentially September)

This year I thought it was all ok....they went through the winter ok (nationally 30% of colonies died out) and as they had swarmed last year I had thought they were ok this year. WRONG! In May one colony swarmed and the other was thinking about it....UG! However we caught it in time and they actually got their act together and got strong! This may have had something to do with the chronic cursing of the bees that I was doing on a regular basis....I also told Charlie how if there was no honey this year they were out.....

Misunderstanding #4 ‘Opening the hive and being surrounded by bees is therapeutic and helps you connect to nature’
Sod that, when you have bees crawling up at you and hundreds in the air including pingy bees (those that fly at your veil in an aggressive manner it is now calming!

So onto the honey....and a quick guide are to how we get it 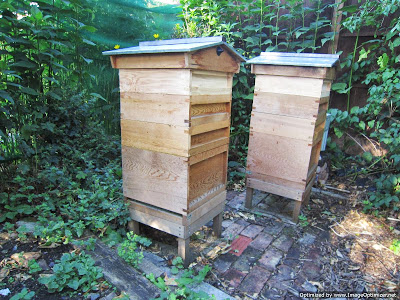 This is the hive...basically a set of boxes filled with frames of wax that the bees draw out into honeycomb. The one at the bottom is their ‘nest’ where they breed and above it is a mesh that regular bees can get through (the queen cant as she is a fatty). Above this box is what’s called a ‘super’ which is full of smaller frames which the bees will fill with nectar when there is loads around (a honey flow)

The bees bung nectar into the little cells then dehydrate it at which point it becomes honey and they cover it with wax. When 80% of the frame is covered in wax you can remove the frames and collect the honey. 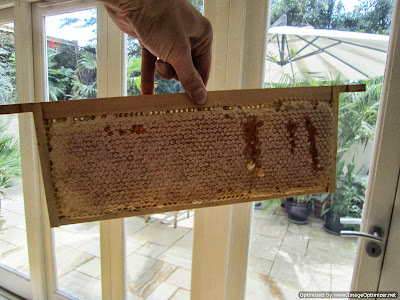 Firstly after removing the bees (this sounds so simple!) you then cut the wax off the frame with a bread knife 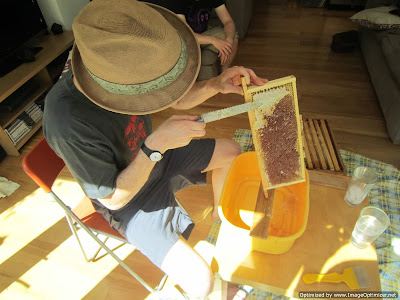 You then put the frames into a giant centrifuge

The honey (and gunky wax) collects at the bottom 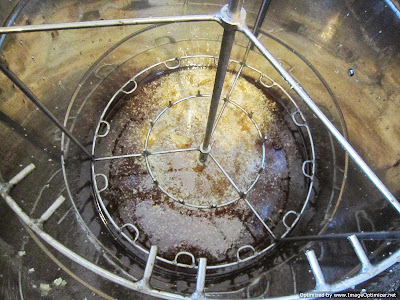 Which you then strain 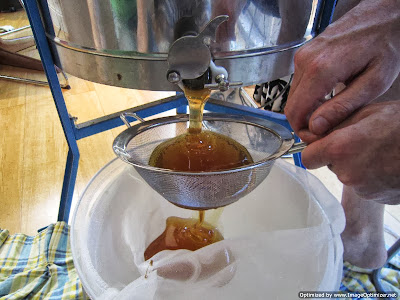 And then let settle (unless you are super impatient like us)

Then it goes into nice jars! Tah dah! 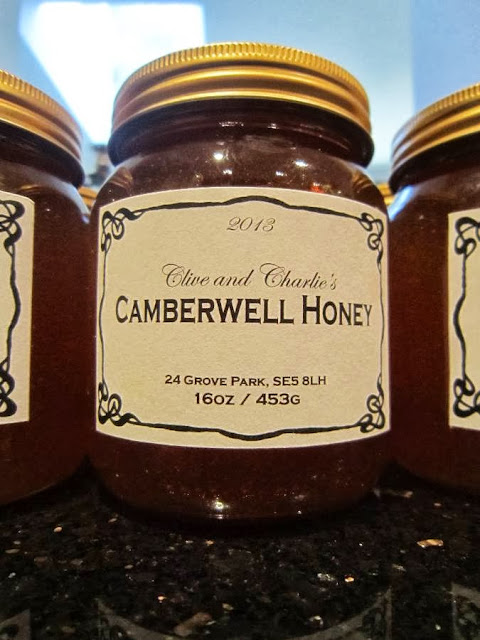 Misunderstanding #5 you don’t always need protective clothing
Last year I had a pull on smock (ie a jumper with a fancy hat) this year I have a full on jumpsuit and wear it with Wellington boots and washing up gloves. People do bee keep without much on but Im not one of those people. It is also one of my favorite Charlie moments where he says ‘I don’t need gloves our bees are very docile’ before promptly being stung on his hand and putting them back on

Misunderstanding #6 beekeepers are all old men with beards
I had thought this may be the case, and for my first London Beekeepers Association meeting I had grown a bit of a beard especially so was very disappointed to find lots of nice ladies (without beards). One of the nicest things about beekeeping is the people as there are some lovely folk out there and beekeepers are everywhere!

Misunderstanding #7 bees just sit in the corner of your garden and don’t worry anyone
Kind of true however don’t get in the way of the flight path (especially if you have a perm as they will get tangled in your hair and sting you) you can fence them with a net as cleverly they fly up to the height of this and then stay there however this still needs a good chunk of space. They also like to drink water and love hanging around your drains/cherub water feature.

So a bit of an overview....in essence beekeeping is a lot more complex and harder than you think! Every bee keeper will also tell you a different thing and always remember that bees are wild animals.... If you are interested do link to your local beekeepers association. In London the LBKA do a mentoring program where you go beekeeping with an experienced person for a year to see what it is like and learn about bees. Do this and then decide if you want bees.


PS a great blog about beekeeping is here  http://missapismellifera.com/

Email ThisBlogThis!Share to TwitterShare to FacebookShare to Pinterest
Labels: bees