On Thursday I was lucky to be able to escape London to go to Gardeners World Live in Birmingham with my friend Peter. This was my first time and I didn’t really know what to expect, but was very impressed! What I had thought may be a marquee on a car park in Brum was a fabulous flower show. I think it was bigger than Chelsea but smaller than Hampton Court with a huge pavilion and lots of opportunities to buy plants.
I wondered if it would be a little dangerous getting Peter and I together, as we are both as uncontrolled as each other when buying plants, and as Steven couldn’t come there was no one to say ‘where will that go’ or sensible things like ‘that won’t fit in the car’
It was a great set up with lots of plant stalls, I wasn’t overly impressed with any of the show gardens which I thought a little amateur or too simple (there was one which was just grass with a sunken area punctuated by columns of fake grass with Senico on top). The show also ran at the same time as BBC good food live which was a little too much when my mind was so full of plants. It also seemed to have a lot of toffee vodka and hog roast stalls. 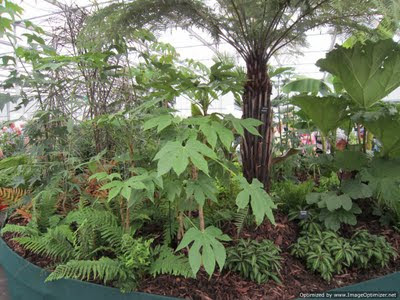 The stand from ‘From Desert to Jungle’ which was one of the best stops for an exotic garden person. Nothing surprising on the stand as it was the usual suspects like Musa basjoo, tree ferns etc. Nice to see Dahlia imperialis as it was far better in the flesh than in a book, and I bought a good few things including a Kalopanax, Lobelia bridgesii and Solanum atropurpureum. Peter had a bit of a tree fern obsession and bought a beautiful large Cyathea after being interviewed by Fernatrix as to his credentials to buy their baby (he was allowed as he has a Greenhouse that doesn’t get colder than 7degrees) 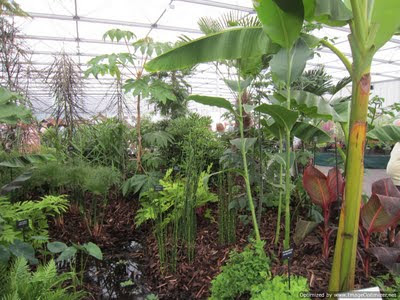 The amusing thing was seeing the gardening celebs. Monty Don was all over the place looking very country in his blue workmans clothes. I glimpsed Carol Klein from a distance which was good as she is such a lovely lady, I just wanted to go up and hug her....I would love to have her as an aunt. Poor old Toby seemed to be just doing a stand on veg growing near the gate...it is a shame how he has been banished, I hope he comes back. In the food bit we saw Andy Peters, the housewife’s favourite James Martin and one of my own current bits of tv totty Matt Tebut
With all our enthusiasm we had to go back and fill up the car 3 times! I was excited to buy some water plants I had been after for a while, a giant Miscanthus that gets to 8ft and a few palms. The palms were my favourite as the guy running the stall was a proper showman. ‘This is the only place in the country where you will see these three types of Chamerops sitting on a table together’. This lot introduced Chamerops humilis ‘volcano’ which does of course come from Volcano island (I felt a bit silly asking where Volcano island was, or even if it was real as it sounds a bit like Tracey island). He was a great showman and asked me to follow him to the backstage area under a curtain....this did make me feel a little uneasy as the husband was in London and Peter just looking bemused. Of course once I had made it to the inner sanctum I was ready to buy anything and was excited to get a Trachycarpus nanital, and Trachycarpus princepts (for non planty people this is quite rare and exciting). I also bought a £50 Trachycarpus fortunenii and blue Chamerops. Getting home we had a very full car.


So at the weekend I was feeling like I had bought a lot of plants and wondering when to put them when Mum asked if I wanted to go to B&Q with them to buy compost and look at the 3 for the price of 2 plants. It was great shopping with Mum as we just bought everything ‘look, its £1! Let’s just get one, oh I’m sure we can fit those petunias in, they are only 50p. Worst was the pots as they had these nice sandblasted terracotta pots which I have been after for a while as they look very tropical and like they are made of real stone. I had only seen them at a couple of northern garden centres and online to ship from Vietnam (very nice when i win the lottery) I only really wanted 1, but ended up with 4 (buy 3 get 1 free). So...I kept buying, and buying...then as I was there I thought I may as well get 3 more Trachycarpus as they worked out at £33 each. Mum and I bought more, Dad got quieter and quieter...then in the car park we realised that we had bought so much stuff and the car was so full that we had to abandon Mum on the Old Kent Road and pick her up later. Oops!
So lots of buying and lots of inspiration, but I must admit I am probably most inspired from seeing Peters garden and spending time with a fellow fanatic. I did my Botany degree with Peter and haven’t seen him for a while and it was great fun having an adventure. He also has a great garden (immense NGS potential) and some beautiful tree ferns and ducks. Hurrah!
Posted by Clive at 11:41