All been a bit crazy in London with the riots... Peckham is very close to us as is the Walworth Road both of which were a little trashed. I’m particularly sad for Peckham as its one of those places which have a bad reputation, but was just beginning to shift (it’s the new Hoxton don’t you know). I do love Peckham as its actually a nice place with a lot going on...if you fancy something exciting do visit Franks cafe...part of the pop up bar sensation...Peckham is also a great place to buy Coco yams and Eddoes if you need some exotic tubers for bedding out

Plant wise we are experiencing a riot of colour as things have grown incredibly in the 2 weeks we were in France..... Coming home to see how things have grown is probably the best bit about the end of a holiday and I’m usually in the garden pretty soon after dumping the bags 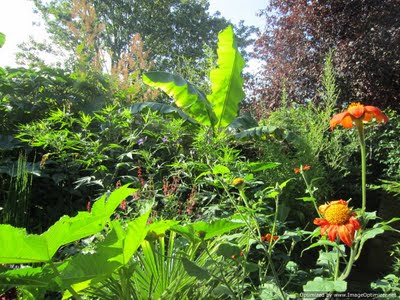 Big things include
Tithonia: these are now all out and very wonderful, my big success of the year and a plant I now always want to grow. Very easy from seed, big and drought resistant with such vibrant colour. Wow, I’m in love 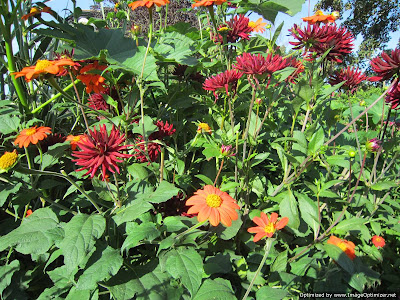 Dahlias: now all fully out, apart from one which is sulking.  I’m particularly taken with this dark red/black cactus...I think it is called 'Chat noir'

Paulownia: mine grew about 3ft in 2 weeks! They now must be about 12ft tall....much bigger than last year, and all this growth is from one year. 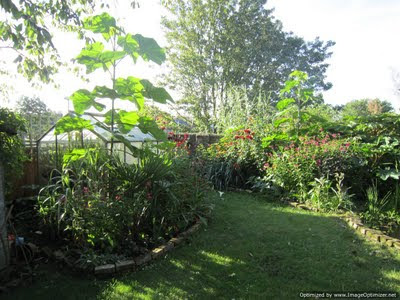 Nettles....they seem to really like germinating in August. My fingers hurt and I have a rash on my knee...ouch.
Swiss chard....gosh this grows lots and I have masses to eat...
Lots of weeds which I’m almost on top of, I had planned another gardening day last Saturday with friends but they all seemed to have some infallible sounding excuses and it ended up being me and a rather hung over Rachel. We got lots done and in prep for opening I’ve even put down some nice springy bark chips which make the paths look a bit more professional, but we are having an official NGS visit tomorrow evening so I hope everything is up to scratch!
Anyway, opening is almost here......and on Sunday 4th September we will be opening for the first time. Eek!