Preparing for winter (and an imminent tv appearance)

I was thinking that as I am about to be on tv talking about overwintering plants I should actually start doing something myself!....by the way looks like I will hopefully  be on Gardeners World this Friday (21st)


One of the problems with jungle gardens is that it is very hard to start preparing for winter, as a lot of the plants you grow are just getting better and better through the year. Natives/traditional plants often are a lot more cyclical reaching their peak for their high society appointments at Chelsea and Hampton Court and then winding down through the rest of the year to when winter is a welcome relief.  Exotics just build momentum, showing off more and more until they are caught unaware by the frosts. 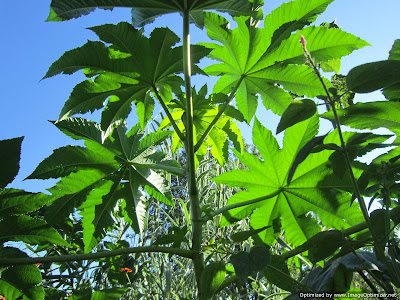 A lot of the garden is still looking good, particularly the Ricinus, bananas and Kangeroo apple however loads is looking well manky especially the Dahlias which is why I’m very jealous of many people who still have them looking pristine... I have a feeling I probably need to keep feeding them to keep them going.

Its also still rather warm and sunny, in a moment of madness I even whipped my top of for a bit of topless sunbathing to get my vitamin D levels up. I also had to get the hose out to water some much abused looking plants as the soil is so very dry in much of the garden, and was incredibly hard to dig. 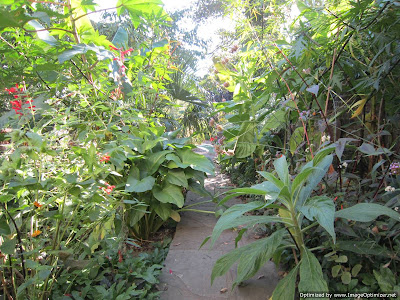 I was compelled into action this weekend as the boot load of plants I bought last weekend, along with those from the RHS show are just sitting there looking dry and should really go into the ground before winter. It is always so dull to just buy plants to go in places where you have gaps, far more of a challenge to just buy buy buy! but the prospect of squeezing in 20-30 new arrivals is a little daunting.  Often the first thing I do when planting is to see if there are any bits of lawn that can be slowly eeked away to enlarge beds...this always has to be done a little secretly to prevent strife with the non believers, but this weekend I just couldn’t break new ground it was too hard.  I then got into a vicious circle where I would move things as they weren’t working and put something new in, but then the maths didn’t add up as I would dig three things out to put one in, so I then had to find new homes for those three things.
I don’t do a huge amount to prepare for winter....Dahlias just stay in the ground although I will add a thick layer of mulch to a few faves, especially my new Dahlia imperialis which from a 30cm plant I bought in July is now up to about 8ft.  I did have a Carol moment and went around the garden collecting seed, as seed is getting more and more expensive. I have been protecting the bananas more as although Basjoo and Sikkimensis are both root hardy for me their stems can be lost if the winter is hard. As they are also quite young I’m trying to help them thicken their stems before taking a chance.  I’m also increasingly seeing how it is the wet that kills things over winter, and am making the most of a covered side passage which is open to the elements at the end, but will keep things dry. I also think it is warmer than the cold greenhouse. 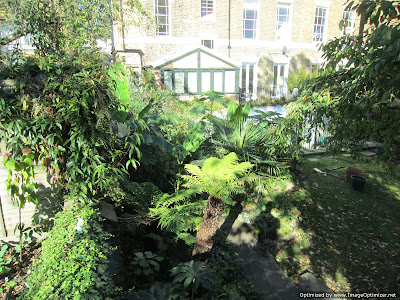 My initial approached to jungle garden was a bit lazy, as I don’t want to be someone who relies upon a huge amount of tender stuff to have a nice looking garden. This looks great but is then expensive and a huge amount of work to over winter. My basic approach is to have a structure of hardy exotics (I just counted and I now have 12 young Trachycarpus) this is mixed in with hardy perennial things that look wild/jungly in the right context. I then have loads of annuals like Ricinus, and the odd tender thing...  It is getting this balance right that I’m aiming for, whilst not being too distracted by tender things that I don’t have space to overwinter.
Saying that there are lots of plants I take chances with, and opening for the NGS I’m perhaps less prepared to take risks so will be moving lots of things to the side passage such as Geranium maderensis (almost hardy, usually pegs it in Feb), Opuntia (hardy but the cold makes its pads skanky), Cyperus alternifolius and Musa lasiocarpus (which is hardy for me but i want a head start next year), Musa sikkimensis (to save the stems), some of the 1yr old Albizzia seedlings and a few of the new Salvias. We also have a meter room cupboard which is quite warm where I will cut back and store the Cannas, Bugmansia and for the first time a Musa ensete.

So I think I will wait a couple of weeks until the first frosts are imminent or blacken a bit of the foliage....I can’t quite bring myself to cut things back yet whilst they are still looking good so will cross my fingers and hope that things will be ok. I guess I should also see what Monty and Carol say on Gardeners World.............. 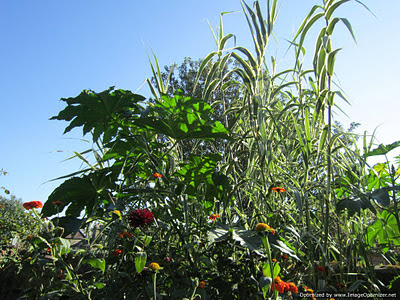 Anyway, I hope me and Carol on tv will amuse you, I’m rather apprehensive about what it will look like and if I look like a twat/idiot/overly camp (all the pictures Mum took seem to have me standing with my hands on my hips!). Self awareness/how you look/sound on tv is always odd. I was filmed this week by the lovely Sunil for a funding bid for work, and he did a great job creating a very high quality video and I was relieved at how I looked and sounded ok and didn’t seem to be much of an idiot although I do pull a huge amount of faces. Who knows how I will feel next week!
Posted by Clive at 10:27