End of June: a tour of interesting things and nice plants

How is it the end of June already?!  The garden feels good at the moment, and Ive finally found at least one moment to get the hammock out and relax.
I was thinking about waiting until July for this post, but I want to keep the Osgodby fans apetite sated, and Im off to Hampton Court on Tuesday so fully expect the garden to be littered with pots of homeless plants.

Currently Im uber tired and tapping this with one finger from a butch day of cementing the bricks round the edge of the new formal pond. Gosh its hard work. I fully understand why builders seem to need to have lots of breaks to rest and oggle ladies...

Garden wise things are ok.... somethings are uber lush others need a few weeks of warmth and sunshine to help them get bigger as I am a little concerned I wont get as jungly as I want by September.

Other good news is that the bees are getting better.....one hive now has a queen which is no longer a virgin, and is happily laying loads of eggs with lots of young waiting to emerge. We even spotted and marked her (Charles you were right you do mark her with a minute tiara). The other two hives are still looking sad, apparently without queens however I have put a frame of eggs into one so we will see what happens. Will we get any honey this year? who knows!

Anyway a tour of the garden... 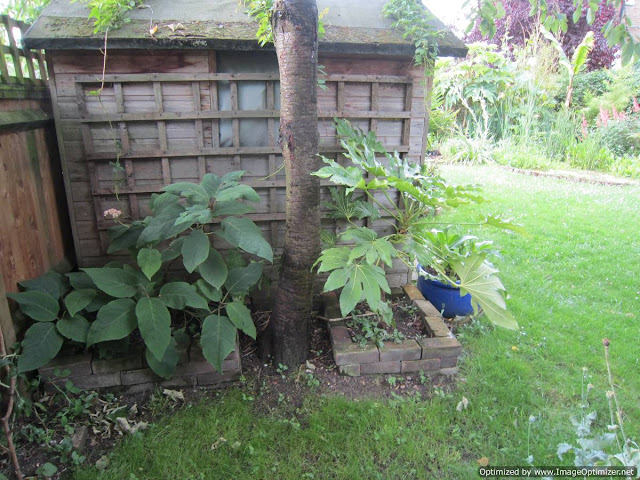 This is Hydrangea macrophylla and a Fatsia looking lush and jungly 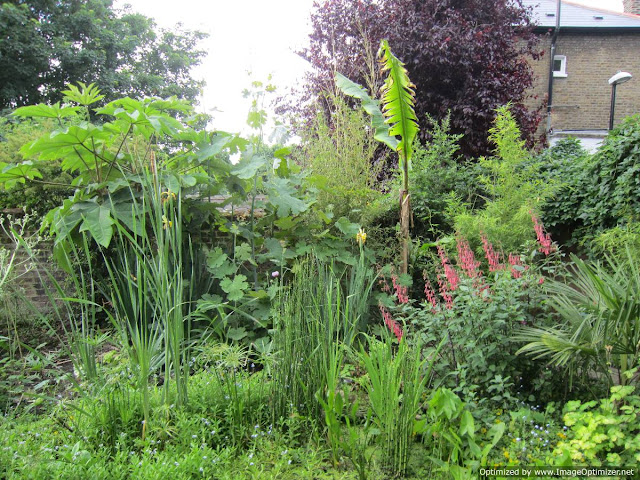 Im particularly pleased with this view at the mo as the banana has emerged, the bamboo to its left has almost doubled its size with new culms emerging, and the plume poppy which although being terribly invasive, has filled a gap nicely and is looking lush next to the Tetrapanax which is increasing in size. The Cape fuchsia is also bringing a welcome splash of colour behind the pond margins which have suitably padded out and meshed into a verdant swathe 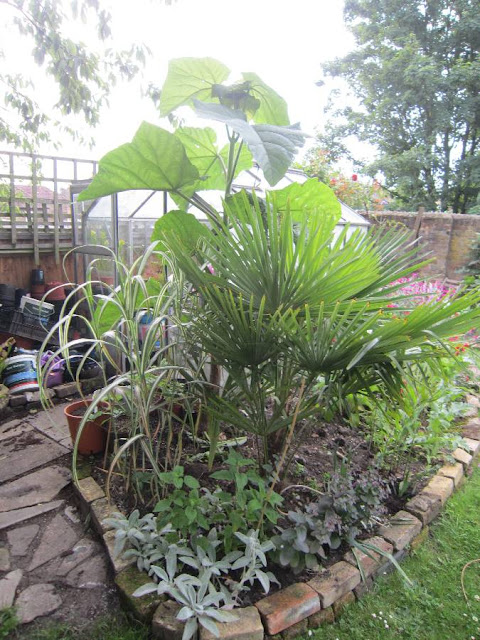 Paulownia reaching for the skies again... 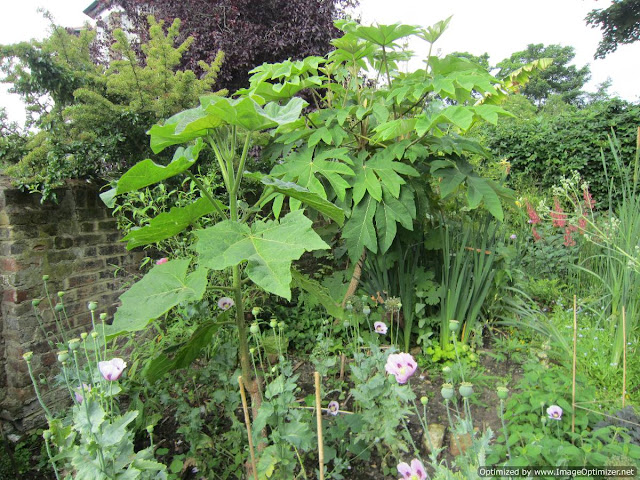 The other Paulwonia...you can see where I stooled it this year. Tetrapanax behind with a swathe of Tithonia and Ricinus planted underneath waiting to get bigger... 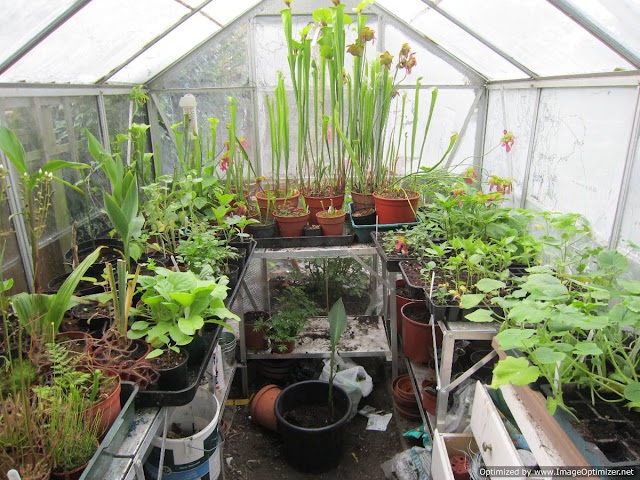 Ok so my greenhouse is still rather full.....mainly I have far to many pumpkins which need homes, and pots of soil of coco yams which havent emerged. 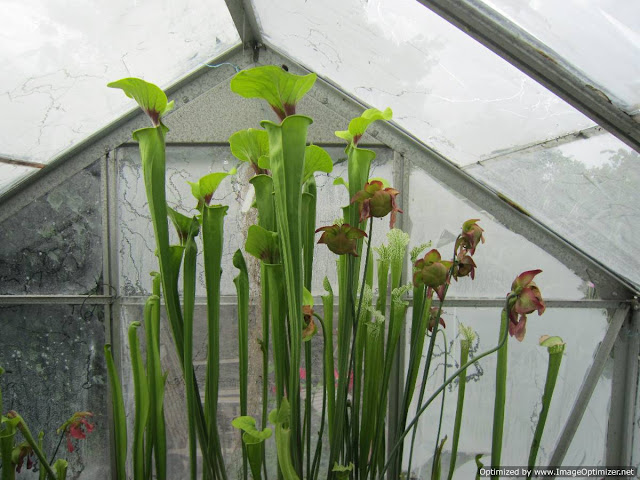 Magnificent Sarracenia....S.flava 'red throat' and S. leucophylla behind. There is a fly just at the top of one of the biggest pitchers 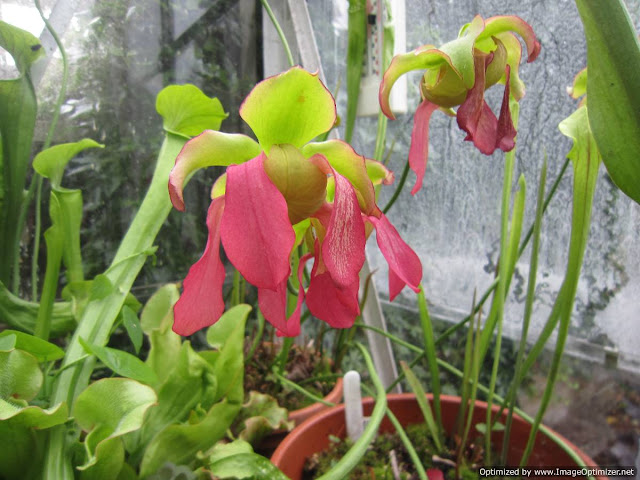 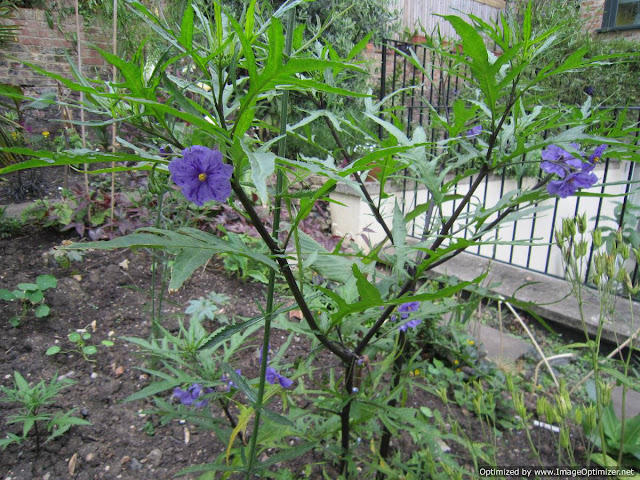 This is the overwintered Kangeroo apple just starting to flower 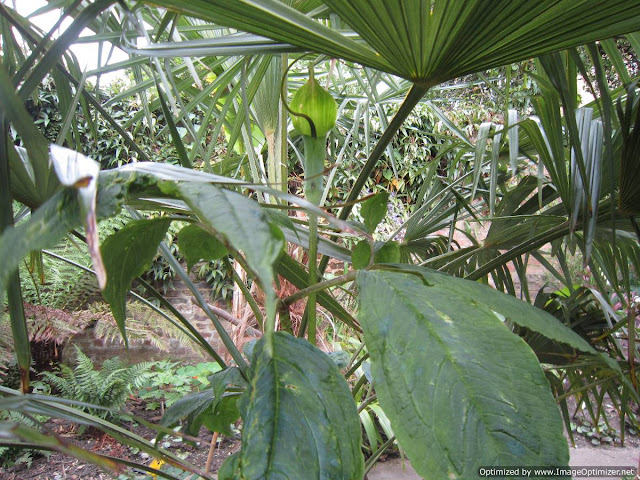 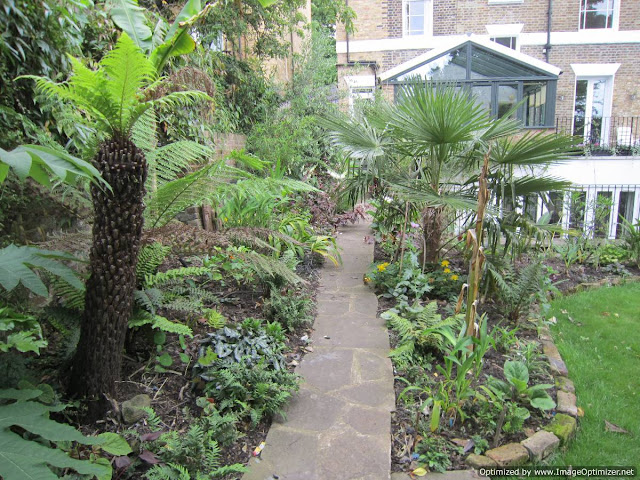 Path is filling out...this year I have tried to bulk out an undergrowth of Polypody ferns. the stick on the right is a Musa sikkimensis....all my bananas are sulking at the moment and not coming into leaf :( 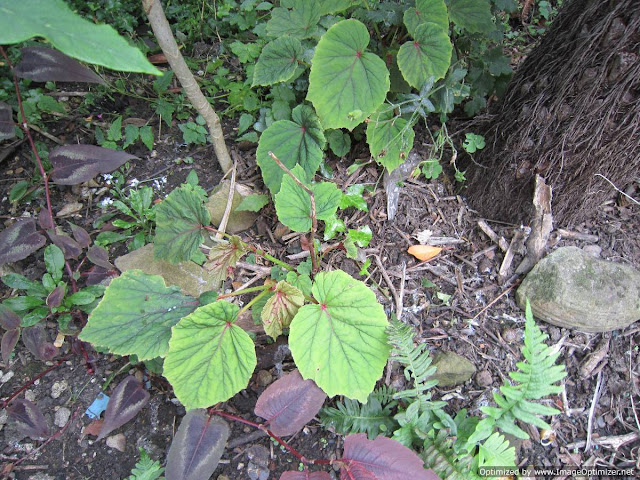 Hardy begonias (B.evasonii) i love them at this time of the year as a mound of leaves with pink middles. They also proliferate easily as they produce bulbils in the leaf axes at the end of the year and pop up in random places 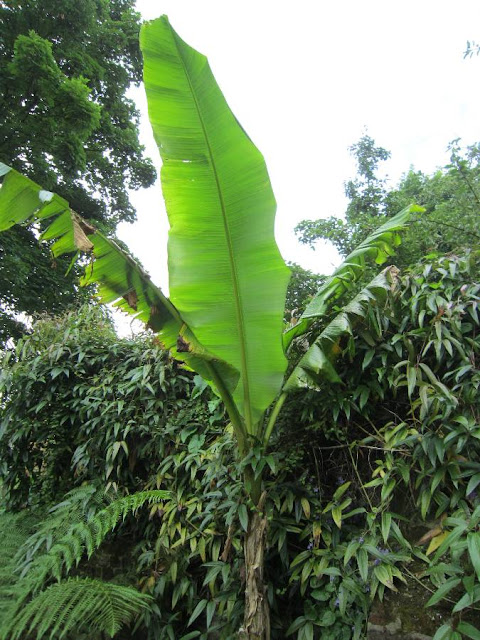 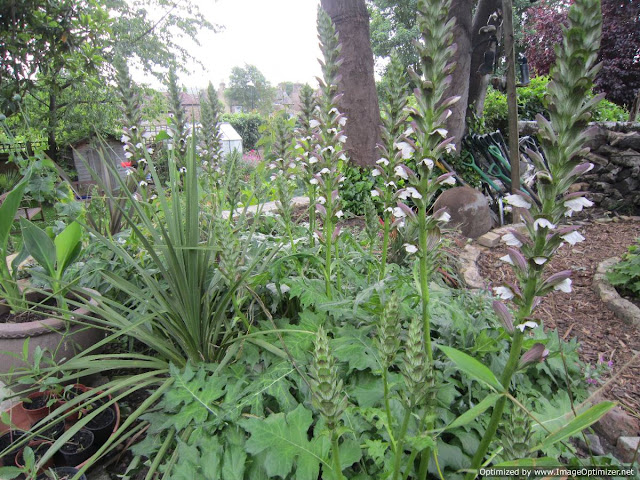 Acanthus....this is my 'oh nothing will grow there' plant, as invariably I stick an Acanthus in, and they seem to be doing well 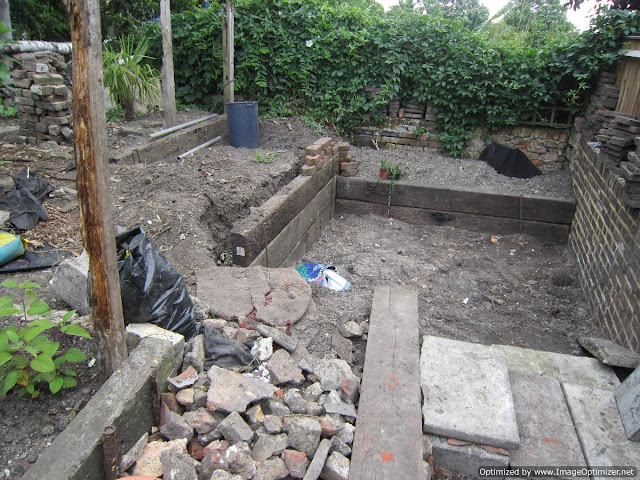 This is the last piece of the puzzle still to do, although we have already moved tons of earth to level things out and put in the sleepers. Cocktail spot here we come! 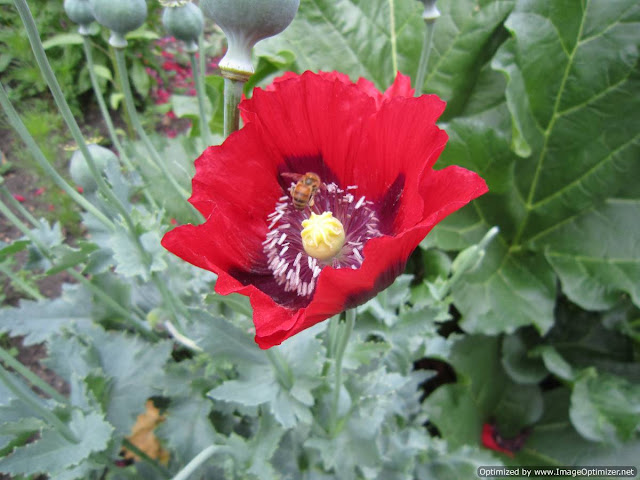 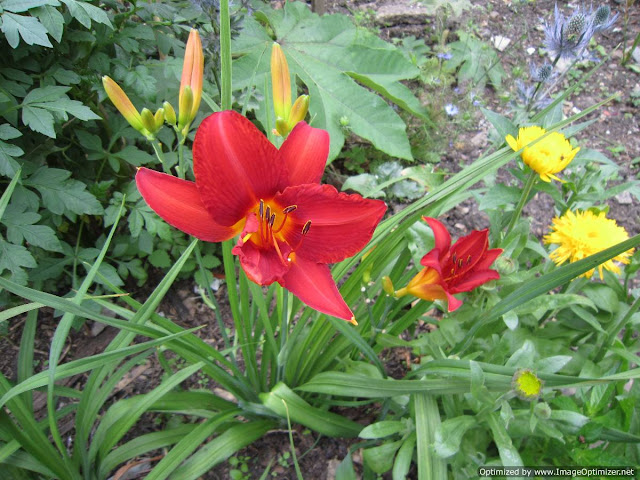 This daylily has such a vibrant red flower, and fits in well with the look Im wanting. Others can be a bit cottagey, but this one is a little Henri Rousseu 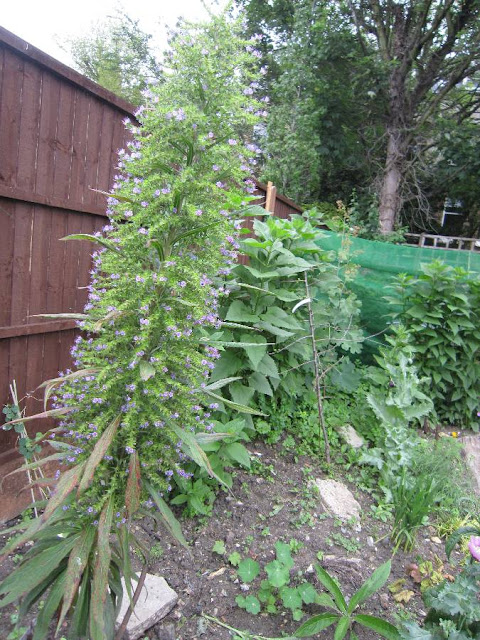 This is the only giant Echium I have had in flower for 3? years...I overwintered it in a pot and although still 6ft, isnt the 12-15ft Ive had in the past. However I hope it will set loads of seeds to get a new forest going 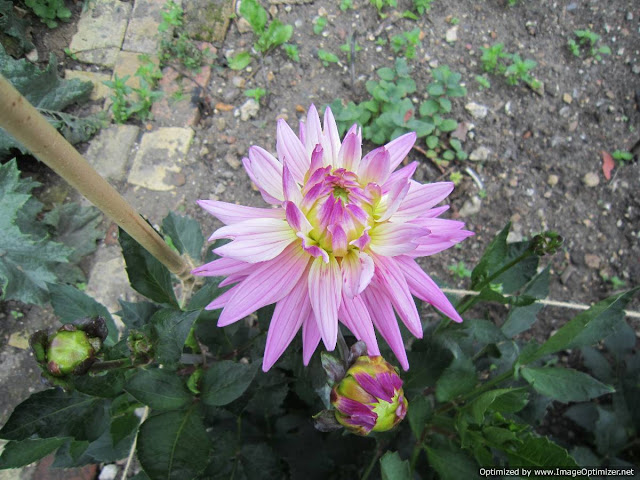 One of the first Dahlias flowering...I wasnt a fan of this one last year as it wasnt the electric pink I was expecting so I have moved it into a side bit for cut flowers... I like it more than I remember and may keep it. I dont know if I could throw out a plant?! 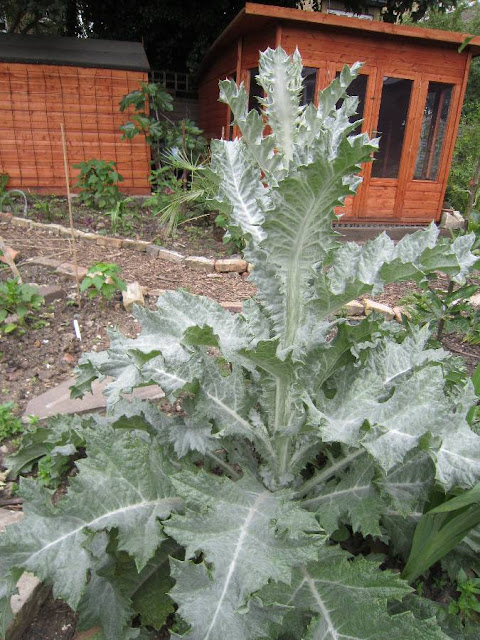 Giant thistle....Im very excited to have this grow as in the past the slugs get it. and yes it is as spikey as it looks 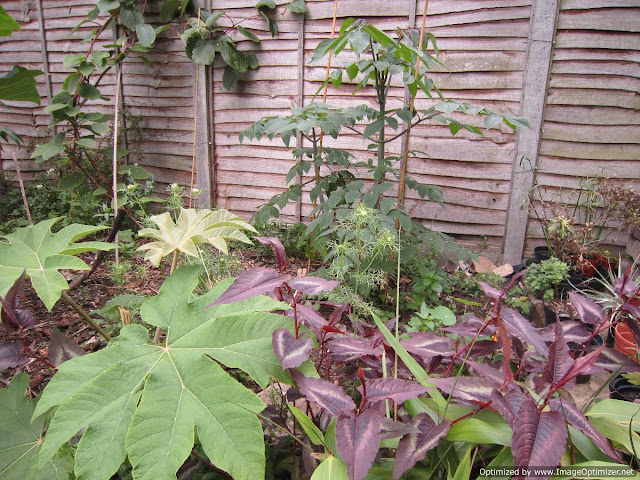 Tetrapanax, Persicaria 'Red Dragon' and Dahlia imperialist beginning to go into 2nd gear. Last year it was 10? ft by the end of the year 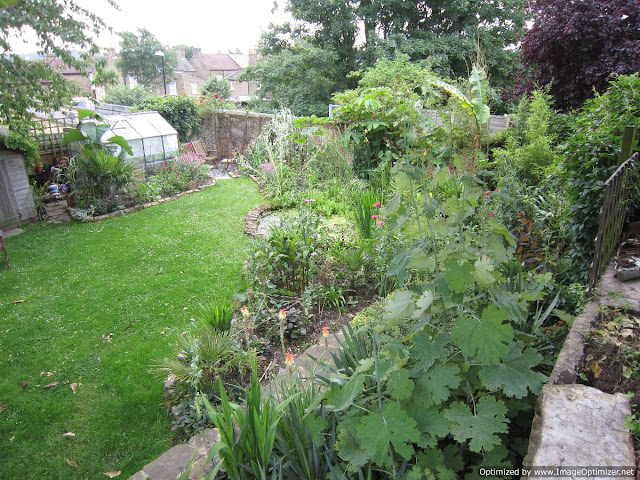 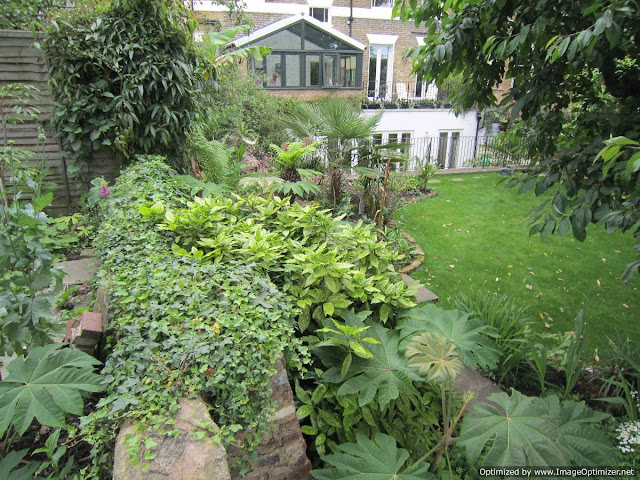 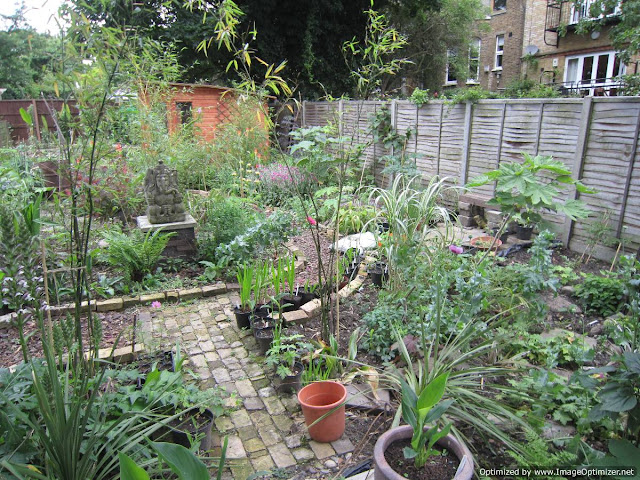 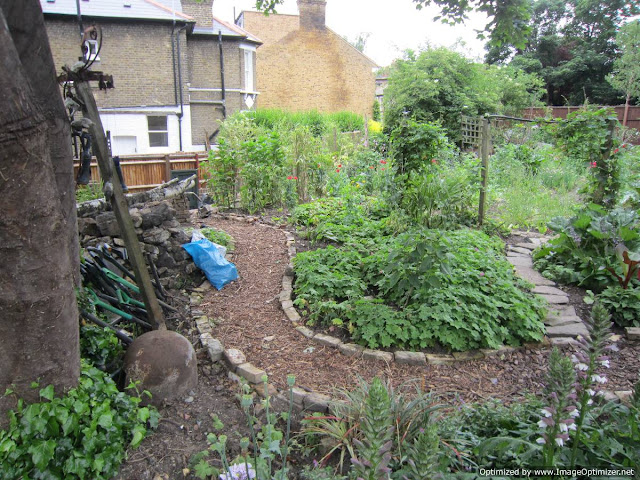 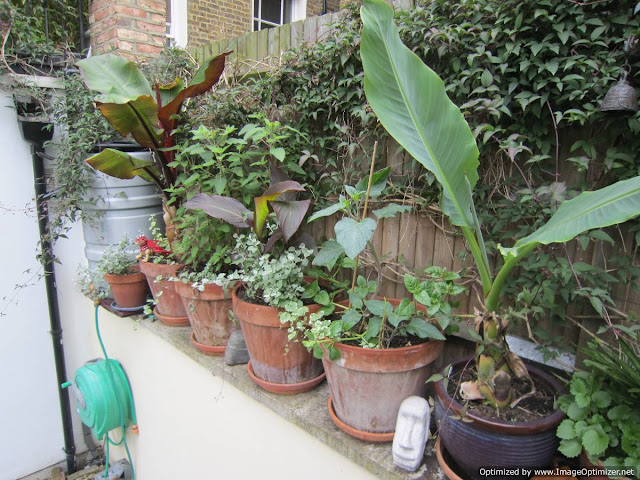 Pots on the side of the terrace...Im going for more foliagey than last year with the Ensete, a red foliage canna and the Musa lasiocarpa. However I also have a Datura, red salvia and Mirabilis longiflora to peek through 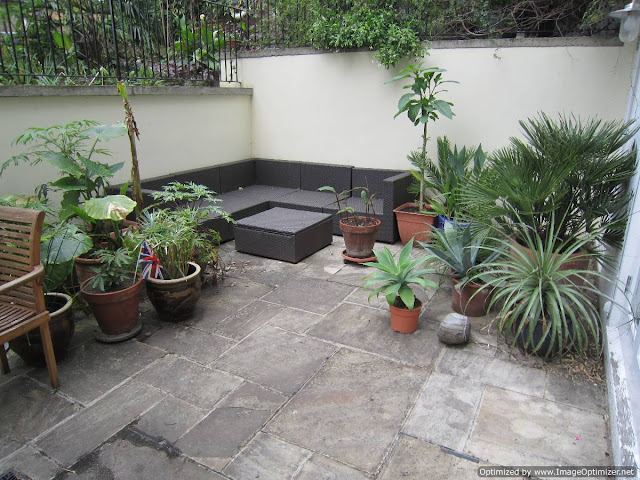 Finally the restof the terrace which needs a power wash and the pots finding final positions. I have a large Brugmansia at the back, and a Cauteleya which is doing the best Ive seen it now its in a pot. Schleffera, Puya, Agave attenuata and Americana

Happy gardening!
Posted by Clive at 11:05