A surprise at the RHS autum show

I had planned a dash to the RHS autumn colour plant show early yesterday morning, not particularly expecting very much....I think I have already been fairly vocal about thinking that these shows are getting very samey with many of the same nurseries, same types of displays and formats, however yesterday I had a big surprise....


The main hall was much as usual...autumn colour is my thing and there were some displays of dahlias and a good amount of salvias that I was unfamiliar with. I also got sucked into buying a few ferns, and particularly some different species and varieties of Polypody as these ferns do so well at the front of borders and cope with dry shade admirably...often in the wild you see them colonising dry stone walls. 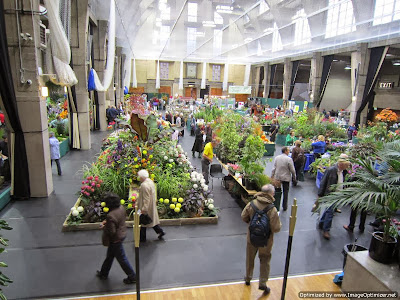 I was pleased to pick up a Kniphofia rooperi...a stunning red hot poker that looks its best at this time of the year...vivid colour and a nice chunky poke.  I also bought a replacement Eupatorium capilliaris to give it another chance as I can’t decide is the winter or the slugs killed it...


However the surprise came when I went to the other hall....firstly we were directed to the side entrance where we entered into a dark Heuchera art instillation.....trippy music was playing, and drapes enclosed the space....projections of colour were on the wall and instillations of heucheras with lights and vinyl records posed tripping risks. I did wonder if an organiser had been at the magic mushrooms.


A further surprise was in the main hall where three quarters of the space was given over to more art instillation's...on one side there were things (big olive tree, rock, block of ice) suspended on ropes high above sand filled planters. Then there were cages and adventurous corrugated iron planters. Blimey. 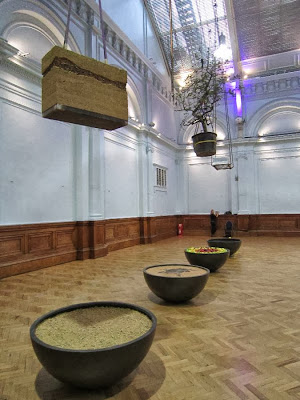 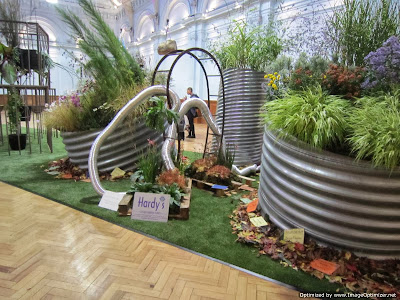 ﻿
I think it was great for the RHS to do something different, and very adventurous however it must have appealed more to a younger audience and not their core users...I did wonder if St John Ambulance were on standby in case some couldn’t cope with the change. Certainly when I was there the stream of people was more just around the plant stands...those that ventured over to the art tended to look for the labels of the plants that were being used. However it amused me and I stayed for twice as long as I would usually....go have a look and see for yourself!


So all very exciting, what awaits us at the spring shows?
Posted by Clive at 00:31