Last week saw the official NGS London launch which was a great opportunity to see friends over a glass of wine and together aspire to one day receiving a silver trowel for long service (so far all I'm in line for is a plastic one from the 99p shop). It was a well run event and a nice thing to see other garden openers and celebrate what we are doing. Amazing how another year had gone by, I want to say how I feel calmer than last year but I would be lying! Although we got used to the practicalities of NGS opening such as the which cakes, will people come, will they be very judgemental etc there is still a lot of work to do in the garden
I’m pleased with progress as the structure is almost there and I’m trying to get the clearance finished to prepare for planting in a couple of weeks. This is easier said than done when I spent this weekend on a bee keeping course, and with trips to the in-laws planned however I have some days off planned and ‘garden attacks’ short sharp bursts of getting specific things done such as moving concrete blocks or the fig tree. 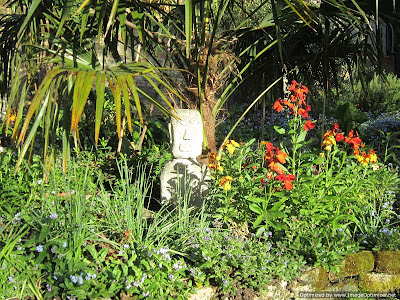 However as things take shape I thought I would summarise my main planning and thoughts for the year
Verticals: hiding the neighbours and giving some privacy is key, there is already a structure of tall things including some fruit trees, Clerodendrum trichotomum, bamboos, fig, Cotinus, Tetrapanax etc but they are taking a long time to grow, especially my 8 Albizzia which at one year old are only 10cm high. I am supplementing this with tall wig wams dotted around, and a bit of trellis which will be covered in Eccremocarpus, Ipomoea and nasturtiums. I’m also planting lots of big clumps of Jerusalem artichoke as I have lots of these and they will easily shoot to be 8ft tall. The plan is also to hide all the fences with climbers. 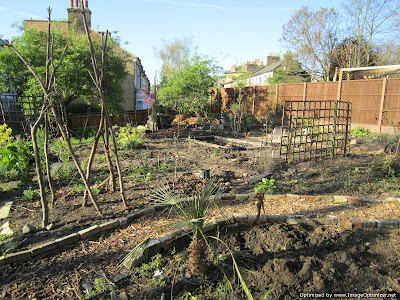 Exotic accents: A lot of exotic gardening is about stage dressing a garden with some strong architectural plants which draw the eye and make you think oooh exotic. I am doing this with a framework of Paulownias with my 2 established ones in the lower garden, 3 that went in last year up the top and 2 new ones, but I want more!....I’m doing the same with Tetrapanax and have about 9 young ones planted up the top along with 5 Chusan palms, and 2 othertypes. I can’t wait until the Paulownias are established as they will look crazy!
Exotic annuals: As the garden matures there is less and less space for annuals, but loads up the top. I will have the usual raft of Ricinus, and have just planted about 50 seeds of Zanzi Palm (now my fave variety) with lots of Tithonia again and other things for a bit of dramatic colour 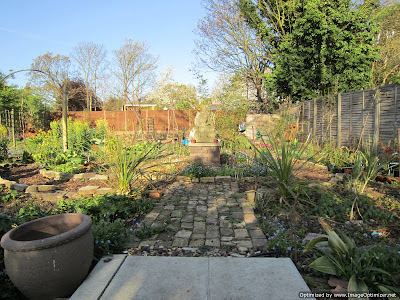 Dahlia forest: I’m liking Dahlias more and more as they do well with me, are easy, survive and look pretty....I’ve got about 30 more this year including some for cut flowers which I thought about filling the new bed by the bees with to create a bit of a forest. All the old ones are sprouting including my Dahlia imperialis (see the very small purple shoot below!), and I have also bough Dahlia excels from Crug which I’m excited about as it should be equally imposing. 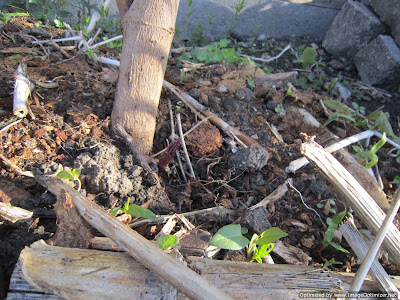 King of the Cannas: I’ve always dabbled with Canna but am very cautious as the first load I got over the internet 3 yrs ago all had virus. I got carried away on Harts website and bought about 30 which I’m very excited about growing, especially the very tall foliage types. I will watch very carefully for virus, but in the worst case scenario they will look great for the year.

Windy paths: Last year when clearing the land one of the first things I finished was the central rectangular veg bed, edged in brick paths as I wanted to get growing veg and flowers quickly. As new areas of the garden were slow/impossible to clear these paths were the main access routes of the garden, however I have been working on a new windy path to go all round the edge bypassing the veg plot which is adding a whole new dynamic to the garden as it is breaking areas up, making them harder to get to and adding to the whole garden journey. Paths are windy so you don’t see everything at once, and it slows you down.... I also have a complex series of stepping stones on top of that, but these are my secret paths.....
Better fruit, veg and cut flowers: Last year veg growing took second fiddle to clearance and panic gardening. This year I’m trying to be better and have planted fruit trees, bushes and know more what I want to grow (chicory looks pretty but is very bitter.) I also loved having lots of cut flowers last year although there was a bit of a glut at times, I’m also trying to grow more plants I can cut in this area so I feel happy harvesting them (I always feel guilty cutting perennials in the main garden) I now have things like an Arundodonax there which I’m quite happy to use and abuse.
Summerhouse: this is the last structural thing to go in. I have been waiting until most of the land was cleared before ordering the summerhouse as I’m cunningly using all the rubble for its foundations. I’m already designing the planting from the perspective of the summerhouses views and can’t wait for it to go in as it is the last main piece of the puzzle.

The sunken corner: This is the area in the corner of the new bit where there is a steep slope to the alleyway. I think it is the only question mark in the garden as it’s a big project and we don’t know exactly what we are doing. Last year we just put a weed membrane down to grow pumpkins through! The current thinking is to use railway sleepers to create a square sunken terrace, and edge it with silver birch trunks which can be used as posts to run wires from to the fence to create a canopy for climbers and squashes. I think this will be fab, but as I already have all the climbers in pots it needs to happen soon....

Giant Plants: In a slight move from the exotic Ive been searching for giant plants that make you feel small as this is the feeling I want to evoke accross the garden. You get this with a lot of jungle and big leafed stuff but also Arundodonax, and Ricinus etc but have also got some giant Inula, Rubbeckia and Helianthus

Experiments: there are always experiments but this year I want to see if giant Jersey Kale can look exotic used in the right places, if I can mulch lots of things, I’m also trying to have a prairie jungle look by the new pond and if the drought ever clears an irrigation system in the lower garden so I can properly water the tree ferns.

Sitting and drinking gin: this is the key, and most important part to any garden and I’m trying to put in more permanent seating areas with solid seats with a new patio by the formal pond, with the new summerhouse going in soon it will also have a sunny terrace...all of this will be perfect for gin drinking. Hurrah!