You know those things that seem like a good idea at the time?

Well on Monday we finally had tree surgeons in, and I asked to keep the chippings as a) they are free b) I’m fed up of weeding and a fully mulched garden is very appealing.  They were more than happy to, and have even promised more in the future, although they didn’t leave them straight away as said they would come back at the end of the week as there would be a bit more
Hurrah I said! The more the merrier! As the visions of wall to wall mulching, new paths and the most amazing soil materialised.
So all was well, with them suggesting next week for a delivery leaving me ample time to assemble the bee hives (bees coming on Monday) however yesterday I got a quick email saying they would ’drop them off’ that afternoon.
Fine I said calling Mum to open the gate dashing home.mmm. So I came home to threatening skies and seeing Mum looking panicked at the gate ‘the wheelbarrow doesn’t fit through the end gate....where shall we put them....there is, erm, rather a lot’
Walking round I saw tipped on the road the biggest pile of woodchip I have ever seen, it was a bit like the size of a tank, about 5ft tall and literally steaming. Mum and the wheelbarrow were dwarfed in comparison (think lego man next to a tin of beans)
With the sky looking ever darker, and friends coming soon to help finish the bee hives we urgently started shovelling and moving all the chip, which due to a narrow gate had to be carried up the slope in dustbins. Dad emerged home later wandering in the garden with a glass of wine in hand enjoying the garden not expecting the wood chip iceberg that was about to hit him. For 2 hours we shovelled, carried and piled. UG! Never again!

However I now have more woodchip than I know what to do with and all for free! I have been researching if it is ok to use fresh chip as mulch with very polarised views from yes its fine, to no it will kill all your plants and take lots of nitrogen. The advice seems to be that you can use it fresh if you keep it away from stems, don’t put it on too thick and put down nitrogen fertilizer first. Being the king of pelleted chicken manure this is a good option, but I think I will mainly use it for paths, and perhaps try out mulch in a few months when it has ‘cooked’ a bit as it was incredible hot how it got.  I think next year I can then use all the stuff that is on the paths as mulch and get a new load to replace this. 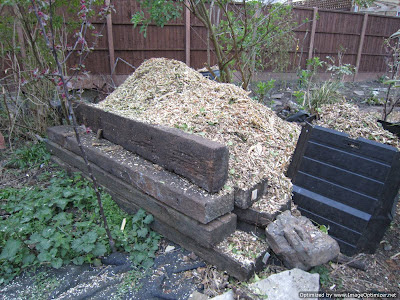 Anyway, other things....it is so good to get the trees sorted.....being in a conservation area we needed to apply for planning permission to cut anything more than 3 inches, and it took ages, but it is all done. Big things being removing a small Sycamore which was in the wrong place, coppicing 2 other Sycamores so I can manage them, and raising the crown of a big Sycamore and removing the ivy. I was very sceptical about removing the ivy as it’s a great wildlife plant, but apparently it was a big wind break so stressed the tree, and as it was dropping the odd big branch we had to do something.
So it all now actually looks really good, especially the big tree which looks healthy and seeing the ivy less trunks is quite beautiful. It’s also so light, and turns the bit of land by the stump (where the sculpture is) into garden and not just ‘that land by the tree where nothing will grow’


Spring is now firmly with us and the garden is awash with forget-me-nots, the birds are singing although things are currently very cold (Easter bank holiday special). Where we are the rain hasn’t been significant, and things are still dry...today is also the first day of the hosepipe ban which is tricky to fathom when Thames Water loses an obscene 25% of its water to leaks and the road near our house has had an unfixed water leak on it for weeks. Anyway, moan over....lots to do, the bees are coming on Monday which is both fabulous and shit scary, and there is the RHS plant fair on Tuesday to go to! Hurrah!